Once again the full moon rises over Attnang and paints the city in a pale light. When the cats sit on the gables and the dogs bark at earth’s ancient satellite, it’s time. Time for me to grab my gear… I sneak through the night, position my camera and try to produce the picture that has been lurking around in my mind for too long.

the idea:
I wanted to capture the full moon framed by the leafs of the big walnut tree in our garden

the problem:
Getting the exposure right.

the experiment:
Sadly, I was not able to achieve the effect I wanted with one picture. A aperture of ~f 25 produced a sharp moon and sharp leafs BUT either the moon was overexposed or the leafs were underexposed. After messing around about half an hour I decided to take the easy way …

the easy way:
Since the moon and the leafs didn’t want to cooperate I decided to separate them and crush their resistance one by one. The first one to surrender was the full moon. Here’s a 100 % crop with the used settings … 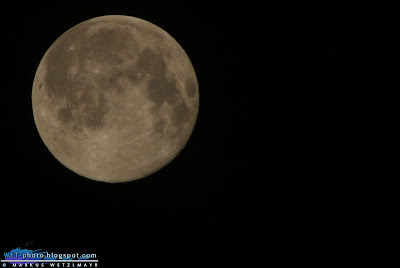 The next step was taking a well-exposed shot of the branches and leafs that should surround the moon. Open aperture of f 5.6, ISO 400 and shutter speed of 1/125 second in combination with the Sony HVL-F42AM flash did a pretty good job.

Now I just had to combine those two shots via Photoshop, adjust the brightness a bit and here comes the finished product … 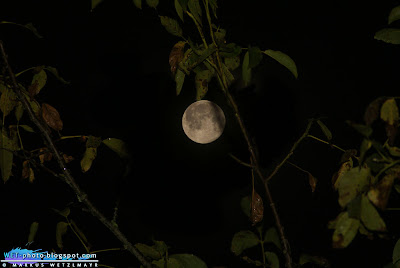 It’s probably not that amazing and I feel like cheating so if you have any tips don’t hesitate to post them as a comment!
I’ll quit night photography for a while now and focus on other types of photography …
Maybe we’ll see some more portraits in the next posts?
Or maybe it will be something completely different?